A few days ago I found myself having to explain why ‘a movie of those downloaded in Peer to Peer is often incompatible with the DivX player .

The evolution of coding algorithms. We try to rebuild a bit ‘of history … this is the first episode.

This section provides information that may be of interest to those who are ‘born twenty years ago and still provides some useful information for understanding the evolution of encoding formats.
As in fairy tales, there was once the analogue television. Then, towards the end of the 80 parties’ initiative JPEG (Group of Experts on the photograph) which produced the standard for encoding of still images also take over the fax, even though age was – rightly – considered inappropriate to the qualitative requirements of the time. Almost simultaneously share ‘initiative MPEG .

Qualitative standards at the beginning were not as these of todays (l ‘ MPEG1 had as an objective quality ‘similar to VHS). The video encoded in MPEG1 was not interlaced and had a maximum size of 352×288 (called CIF , PAL quarter of the ordinary). Today mobile phones are some incredible things, but at the time the algorithm was at the limit of usability practice. To compress an hour of video in MPEG-1 needed a full day of a PC based on Intel 386. The only chance ‘to make real-time compression was to use computational cards based on the same chip designed to compress JPEG images (called RISC processor array), but’ were not available before 1993.
In reality ‘for some things the VHS was far exceeded. On the other hand the ‘mp3 in reality’ is an audio format of’ MPEG1 (layer 3, in fact).

The MPEG-1 had the goal of putting an hour of video on a CD. But the quality ‘was low, particularly if quadrupled to fill a television screen. In fact, the Video CD was a major flop. The guru of the relevant market, however, ‘that digitization would allow to reach out directly to homes hundreds of programs instead of a few analog channels (on the same transponder carrying an analog channel, it can carry 6-8 digital programs).
Then the MPEG – which collects contributions from anyone and algorithms – produced the first transport stream MPEG-2 standard from the then recent satellite interconnection ETSI, and then generalized ‘processing of the video (allowing you to handle interlaced video, what we see on our television sets).

On the 11th of March, 2011, Japan has been exposed to one of the greatest disasters in it’s history!
An earthquake ravaging it, and followed by a Tsunami. It was the 7th most powerful earthquake in the recorded history!

The Social Media Reaction!
An earthquake is not a new disaster in Japan. It’s perhaps the rapid social media reaction that was new.
Since the beginning of 2011, Social media has been proving an enormous success in connecting people extensively in times of crisis. Social Media communications have reached their peak across the Arab world with all it’s happenings, and especially Egypt; you can check the report on how social media was of such a great influence in Egypt, the Egyptians and on driving the Egyptian Revolution.

The Internet was the only way out for what seemed to be drowning country!
Social Media  has been widely used for people to act, react and share something or everything  going on the scene, reaching to the Japanese natural disaster, too! People leaned heavily on the social media networks and platforms to find one another in Japan, after means of communications, specially, electricity supplies were cut!

There is a slideshare presentation about what happened in Japan, which is another way of utilizing social media for a cause “Japan’s Earthquake”

Of course, Facebook was another social media resort for the Japanese, as a means

of  clutching at hopes to find their beloved ones. They have used “Facebook stories” to exchange their stories and find one another. “Some shared stories of connecting with loved ones using the platform are on the Facebook stories page”.

“The social network counted 4.5 million status updates from 3.8 million users across the world on March 11 that mentioned “Japan,” “earthquake” or “tsunami.” – mashable. You can check the map of the countries around the world mentioning Japan as a slideshow.

Not only that but also Causes were created on Facebook to help the Japanese people out of their crises, such as Help Japanese Earthquake and Tsunami Victims, and Save the Children’s Japan Earthquake Tsunami Children in Emergency Fund. 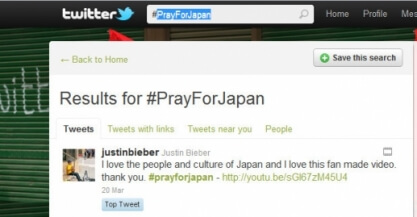 According to Twit-o-meter , after  the tsunami hit japan knocking down the phone systems,  tweets coming from Tokyo exceeded the 1200 per minute. “In a message sent Friday from the U.S. Embassy in Tokyo to U.S. citizens in Japan, the Embassy encouraged Americans “to continue your efforts to be in contact with your loved one(s) using SMS texting and other social media (e.g.,FaceBook, MySpace, Twitter, etc.) that your loved one(s) may use.”

Welcome to WordPress.com. This is your first post. Edit or delete it and start blogging!