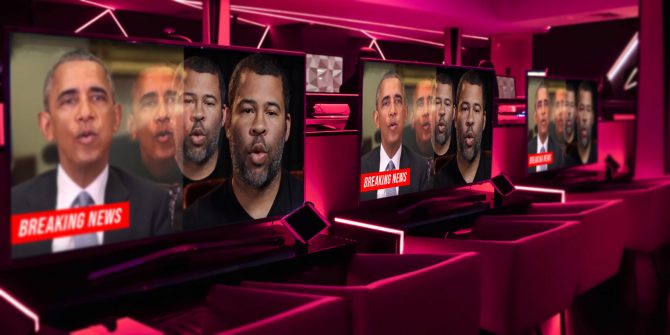 Last year, a new type of “synthetic media” took the world by a storm, when a video of Barack Obama calling President Trump a “total and complete dipshit” circulated the web.The video was released on Buzzfeed youtube channel in collaboration with film director Jordan Peele to raise awareness on this new type of media, and its ability to distort reality. Supported by the fairly new Artificial Intelligence technologies, Deepfakes is a new type of media ( mainly Videos) that could be the next major challenge for information verification, and of course a serious threat to news.

The Different Techniques of Deepfakes

Deepfakes are definitely more than just lip syncing and fun face swaps, there are different techniques to create deepfakes, and it does require technical  knowledge.

Facial Reenactment: Through this techniques video forgers can transfer the facial expression for one person to another. Individuals can play with expression making the targeted person on video look weird, disgusted, angry, surprised…etc.

Lip Sync: Using this technique video forgers can embed someone’s mouth to another’s face on a target video. When combined with audio, people will appear in the video saying thing which they didn’t, like what happened in the Obama video

Motion Transfer: Video creators and researchers figured how to transfer the body movements from one person to another creating a completely different figure movement on video. For examples they have captured the motion of a certain dancer and transferred it to a another person with zero dancing skills making them seem like professionals.

Researchers at the University of California Berkeley, and WSJ correspondent Jason Bellini used Motion Transfer to give him the dance moves of  Bruno Mars.

How to Identify Deepfakes

Different media organizations are working on new tools that will enable them to detect deepfakes fast, in order to avoid any kind of misinformation. One way of detecting deepfakes is to check if the footage has been altered by closely looking at the frames of the videos to inspect abnormal elements. Another way is to go the traditional route and ask sources and subjects directly to get their confirmation first. Another way to detect deepfakes is to use the reverse image method, to check for old versions of the footage. Some search engine offer tools to do Reverse image search like Google Image Search and Tineye. It is advised to also use editing softwares like final cut to check for glitches and unnatural additions to the videos.

“We know deepfakes and other image manipulations are effective — this kind of fakery can have immediate repercussions,” said Roy Azoulay, founder and CEO of Serelay, a platform that enables publishers to protect their content against forgeries.

Deepfakes are precariously believable and there’s no doubt that they represent a risk to the media industry if not to the whole society. A  video showing soldiers committing war crimes or politicians saying the wrong things could literally start a war. However, that does not negate the technology’s many advantages if used for the right reasons. Deepfakes can be used in the entertainment production division to considerably lower the cost of filmmaking and gaming manufacture as well.

Although GANs created many possibilities, deepfakes being one of them, which threatens the lives of many, it can also be used in saving them. GANs can generate quiet realistic images of brains with Alzheimer’s disease and others with tumors. The resulting images will be used to train algorithm to identify tumors in new images.

If you would like to know more about Video Analysis using the latest AI technologies contact us at Insideout10 to learn more about our products and activities.